"I have found my home here in this land."

After her escape out of Austria and 10 years in Shanghai, Rachel Stein found her new home in Israel, where she still lives with her husband, her children and her grandchildren. 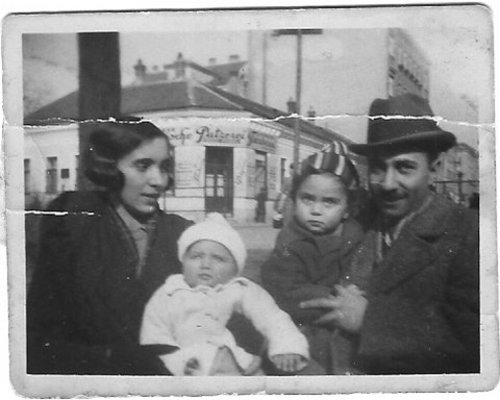 „I was born in Vienna, Austria on 15th March 1937. After Crystal Night, our Austrian Nationality was changed into German Nationality and accordingly Jews had to hand over a “property declaration” and give up all their possesions. My family was given a 2 weeks ultimatum to leave Austria.
On such a short notice it was absolutely impossible to find a country that would accept your family, since we had become stateless Jews in the interval. No country in the world was available or gave us access, until we were contacted by a Chinese Diplomat then working for the state department and who helped us to come to Shanghai, one of the rare cities in the world available for Jews to find sanctuary. No passports or documents were required.
On February 1939, we arrived in Shanghai and lived there for 10 years. In 1942 all Jews arriving from Europe since 1938, were forced into a designated area, known as the Honkew Ghetto. This was dictated by the Japanese, who ruled China at that time and were collaborators of the Nazi Regime.
We as children were unaware of what our parents had to suffer in the interim period, since they were unable to find sufficient work outside the ghetto and many starved and became destitute, sick and died. Living conditions were appalling. When finally the war was over in 1945, we had no idea what had transpired during that period in Europe. Then the sad news arrived that 6.000.000 Jews were exterminated during 1942-1945, among them most of my family members.
In 1949 we once again were forced to depart from Shanghai. We immigrated to Israel and again lived under the most difficult conditions. In tents and baracks. My parents had such a hard time to adjust that they ultimately immigrated to the States where they found a living.
As for myself I remained in Israel. Married young and became mother of two children and grandmother of 6.
In the end I would like to state, that I have found my home here in this land, and have come to the conclusion, that had we Jews had a homeland then, the above atrocities would never have occurred.”